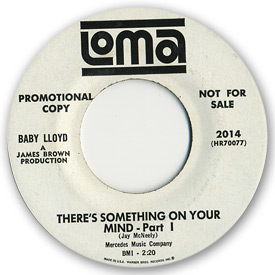 Baby Lloyd's "There's something on your mind", released by Loma in April 1965, was originally a 1959 R&B Billboard hit for its writer, R&B tenor sax legend Big Jay McNeely (Cecil McNeely, b: April 29 1927, Watts, Los Angeles), who recorded the song on the Swingin' label.

The original track, featuring 'Little Sonny' Warner on vocals, achieved Gold Record status, ie, sold over 1,000,000 copies, stayed in the R&B charts for some six months and even crossed over to the national Billboard Top 100 chart where it peaked at 44.

'Baby' Lloyd Eugene Stallworth achieved recognition as a songwriter and member of James Brown's backing singers, The Famous Flames, and his Loma recording of "There's something on your mind" is produced by Brown himself. As an artist in his own right, Baby Lloyd released just three singles - "I need you"/"Wait and see" for Dade/Atco in 1960, "I refuse to cry"/"Precious one" for the Hollywood label Wolfie in 1963, and this one for Loma two years later. 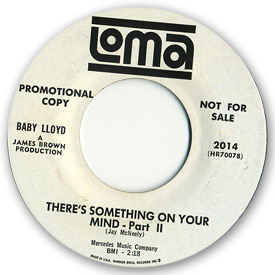 James Brown features on three Loma releases as producer and/or writer. Undoubtedly, his connection to the label being through general manager Bob Krasnow, who, prior to setting up Loma on behalf of Warner Bros had worked closely with King records, the musical home of Brown.

One presumes that Krasnow had purposely sought the input of James Brown because another member of The Famous Flames, Bobby Bennett, also had an outing on Loma, as did Walter Foster, the tour bus driver who delivered Brown and his band from State to State, town to town and gig to gig!

The three Loma records with a direct involvement from the 'Godfather of Soul' are: